Halloween hilarity mix with frightening tales for messy tricks and treats in this spirited episode!

The ghouls got all decked out for Halloween. Agent D brought an out-of-this-world Men In Black vibe, Sara V came prepared as the Devil's Advocate, and Court showed up as a Creepy Countess. 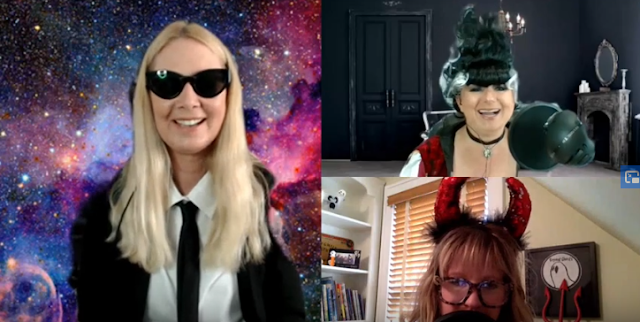 They threw a virtual Halloween party, complete with games and real ghost stories. Including some of their own.

Sara filled the other ghouls in on what happened when she did the Haunting at Home with her daughters. How did it differ doing it in person vs. virtually? What kind of results did they get this time? Did they have to use the Safety Hatch?

Deedee shared an experience she had in the park in Old Town San Diego. While doing a walk-through video, she thought she heard a door open and a floorboard creak. She was in HGTV mode, not paranormal, so it caught her off guard.

The Elisa Lam story at the Cecil Hotel. (Deedee said this is one place she's not sure she could investigate. Court agreed.)

Sara shared what both intrigues, entertains, and creeps her out about Nuke's Top 5 videos and which ones are her faves. (Randonauting!)

The Soothsaying Stalker of a Spirit named Kate, a.k.a. The Bell Witch from Adams, Tennessee.

"What will this haunted Halloween night hold for you?" Mad Libs

"Corona made me say it!"

THE "A HAUNTING AT HOME" PARANORMAL ADVENTURE

Remember, if you want to support the ghouls (they get a little commission), you can purchase The Haunting at Home to try in your own home too.

Just visit The Haunted Walk and look for it under their Tours & Paranormal Adventures, OR click this link: https://hauntedwalk.com/the-haunting-at-home/. Use code AHAUNTMESS to get a 20% discount.

You may notice it's a spirited new tune for the Halloween episode. It's called "Believe in the Magic of Halloween" by WinnieTheMoog
Posted by Madeupgirl at 11:33 AM No comments:

What Happened When the Ghouls Embarked on The Haunting at Home Paranormal Adventure?

They settled into the darkness to play a little game...

Jim from The Haunted Walks approached Courtney about a new product he was offering paranormal podcasters to try --A Haunting at Home, A Paranormal Adventure.

She immediately asked the other ghouls if they'd be up for it. Obviously, they said yes. That's what this episode is all about! 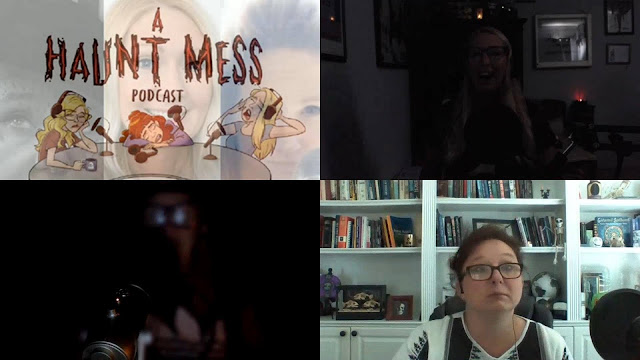 ABOUT THE HAUNTING AT HOME

The Haunting at Home is part paranormal investigation, part spooky activity, that you can do with friends. (Or by yourself, if you're brave enough...)

It's an online interactive audio experience that guides you through a series of paranormal experiments.

It's probably better if you do it in person, but if that's not possible due to COVID-19 or the fact friends you'd like to do this with don't live close (as was the case with Deedee, Sara and Court), the ghouls proved with a few tweaks you can experience the Haunting at Home together virtually.

They all gathered the necessary items --trigger and safe-- along with pens, paper and flashlights and settled in.

Sara was down in her scary dark basement. Deedee used blackout curtains to dim her office. Court just turned out the lights in her office. She didn't have a great dark space to set up in.

Sara had Eleanor, and Deedee had her four new dolls she got from Unsettling Toys. Did their dolls help provoke any interactions?

We don't delve into what the experiments are so as not to prejudice anyone who may want to try it themselves.

However, we do share some fun conversations --and paranormal activity!-- that came up while we did this activity.

Dripping mirrors (Was it a physical manifestation?)

EXPERIENCE IT FOR YOURSELF

Have your own A Haunting at Home paranormal adventure! The Haunted Walks has set A Haunt Mess friends/followers/listeners up with a 20% discount code. Just use code: AHAUNTMESS

Visit this link to get started: https://hauntedwalk.com/the-haunting-...

Disclaimer: We may receive a commission, for which we thank you!

Listen at your own risk...
Posted by Madeupgirl at 5:10 PM No comments:

Rick McCallum Talks About His New Book, Ghosts Believe in Me, Take 2

Some episodes require more than one take. The ghouls nailed their chat with Rick McCallum this time. 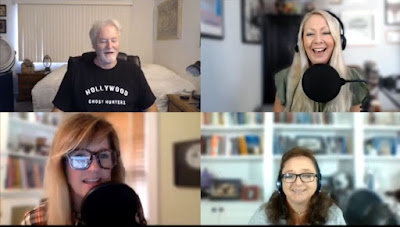 The ghouls peeled back more of Rick's paranormal onion in this episode. They didn't get it quite right in Take 1, so they were glad he could join them for a Take 2. (Well, technically it's Rick's third time joining them, but this time went the smoothest with the fewest technical difficulties. Phew!)

Last time Rick serenaded the ghouls, this time he recited some poetry for them...that involved potato chips. He schooled them in the importance of grammar and shared his theory of self-defense.

Yes, the ghouls learned a lot more about Rick this go around, had a bunch more laughs, and even learned one of the ghouls is a naughty ghost hunter who got busted trespassing. Can you guess who?

Speaking of, after her confession (around the hour mark), be sure to listen closely and see if you think the A Haunt Mess podcast phantom even had something to say about it...

Rick had some doozies to pick from. There was one about a Bigfoot spotted on the Little People's farm, a dude who stole a truck to have an alien encounter but then felt bad and returned it, and someone getting into a fight while waiting in line at a haunted house that resulted in them being shot and killed.

Which ghoul shared which headline and which one did Rick pick as the week's messiest?


What Makes This Episode Messy

Rick's new book is Ghosts Believe in Me, which is available on Amazon.

Where Else to Get Messy with the Ghouls
Online at https://ahauntmess.blogspot.com/.
Socially on Instagram, Facebook, and Twitter.
You can also tune in and watch their episodes on YouTube.
The Ghouls
Deedee, Sara, and Courtney
Music
Nightmare Machine by Kevin MacLeod
Link: https://incompetech.filmmusic.io/song/4133-nightmare-machine
License: http://creativecommons.org/licenses/by/4.0/
Posted by Madeupgirl at 9:18 AM No comments:

Rick McCallum Talks About His New Book, Ghosts Believe in Me, Take 1


Ghoul down! Ghoul down!" That's the main reason this episode is Take 1. The ghouls welcomed back past guest Rick McCallum of the Hollywood Ghost Hunters to talk about his recently released book, Ghosts Believe in Me. 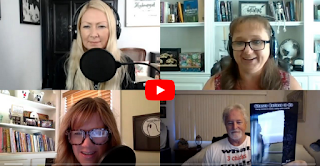 Well, they tried to welcome him back. Computer Gremlins conspired against them. First, it was tricky to connect with Rick. Then, the Gremlins silenced Sara.

The ghouls and Rick agreed it'd be better to try again next week.

However, there were some usable moments. Rather than scrap the whole thing entirely, they pieced together these bits. Most are "What Makes This Episode Messy" kind of moments, but hey. Some episodes work out that way.

Tune in for "Rick McCallum Take 2" next week!

This episode does mention a disturbing incident Rick encountered. The ghouls want to emphasize, you are NOT alone. Help is ALWAYS available 24 hours a day and is only a phone call away via the National Suicide Prevention Line: 800-273-8255.

Rick's serenade (well, it wasn't messy. He's actually got quite a lovely voice.)

Posted by Madeupgirl at 9:29 AM No comments:

Email ThisBlogThis!Share to TwitterShare to FacebookShare to Pinterest
Labels: A Haunt Mess, Ghosts Believe in Me, paranormal, Paranormal Podcast, The Rick McCallum

Sara wanted to talk to a psychic. Not for a reading or a consultation, but because the ghouls really hadn't had a psychic as a guest yet. She put a call out on Twitter and past guest Penny Griffiths-Morgan suggested Garry Fields. That's how he ended up joining the ghouls to discuss a little bit about what it's like to be a psychic, but also how he merges that with paranormal investigating.

He also shared a story about another past guest, Rick McCallum. Funny how sometimes there's less than six degrees of separation in the paranormal world, isn't there? 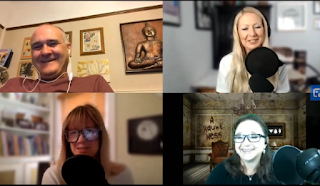 What makes it messy?

We are not sure post your messy moments below.

Posted by Madeupgirl at 9:31 AM No comments:

John E. L. Tenney Chats with the ghouls on A Haunt Mess Podcast

Once upon a time, while talking with the other ghouls, Deedee brought up an experiment she had read that John E.L. Tenney wrote about. Specifically, "Recording Your Dreams: Desynchronized Sleep Manifestation." 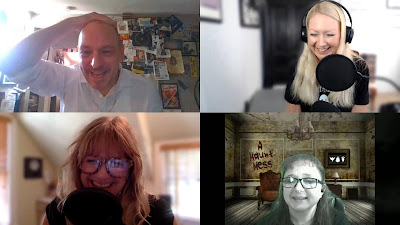 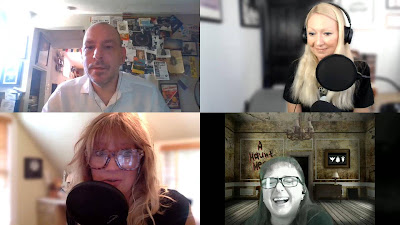 It was about how he used a blank VHS tape, a magnet and that was about it. He then placed the items under his pillow in an attempt to see if he could record his dreams. He also included an image that he said had shown up on one of the tapes after such an experiment. (He'd conducted this experiment multiple times over the years.) Sara and Court didn't believe it is possible. Deedee wanted to try this experiment for herself. Then a funny thing happened. Somehow Deedee and John traded tweets and she took a chance asking him if he wanted to be on the show to talk about all of this. John was not only super cool, but also extremely generous with his time. The ghouls could've talked to him for hours, and hope to have him back on the show one day. Not only did he explain more about his dream experiment, he admitted it sounded wacky and as unlikely as hell. He didn't blame Sara and Court for calling B.S. But he also touched the ghouls' heart with his ethics, principals and love for his mom and dad. What Makes This Episode Messy Faces in looped videos Hairy cubes Floating triangles with legs Eating crow Screeching mics (Deedee apologies in advance) Guest Info John's website: http://weirdlectures.com/ John's Twitter: https://twitter.com/johneltenney John's Insta: https://www.instagram.com/johneltenney/ Where Else to Get Messy with the Ghouls Online at https://ahauntmess.blogspot.com/. Socially on Instagram, Facebook, and Twitter. You can also tune in and watch their episodes on YouTube. The Ghouls Deedee, Sara, and Courtney
Posted by Madeupgirl at 8:44 AM No comments:

Ronny Pascale is a comedian who was recording one of this comedy YouTube episodes "Roast Yerself" with two others when a Shadow figure decided to crawl up the stairs behind him. He didn't notice until people started pointing it out to him. At first he was not worried but as comments and time went by he became interested in what or who it could be! 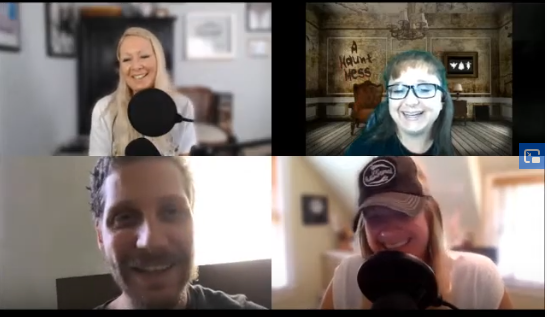 This week the ghouls try to help him figure it all out. There were so many details that came up. Like his new act with dead mom jokes, an old roommate who hid sage in the closet, his old Victorian home (Was it green?) and so much more...

To catch Ronny's act go to his You Tube channel https://www.youtube.com/c/RonnyPascal...

To see his original video check out his Twitter and we will RT on ours. AHauntMess

What makes it messy

Shadow figures crawling up the stairs

Posted by Madeupgirl at 9:31 AM No comments: