Halloween collides with a mukbang and it's all caught on tape --both audio and video. The ghouls had fun putting this Halloween edition together!

Even though Courtney kept wanting to call this the paranormal edition, it's the Halloween edition. (She gets it right once during the episode.)

If this episode sounds a little different (apart from the fact Courtney keeps calling it the wrong thing), it's because the ghouls did something a little bit different this time. In addition to recording their podcast, they also video recorded themselves. That means you can watch this episode now too. Just go to their YouTube channel or Facebook page.

Oh, and upon Sara's suggestion, they tried their hand at a "mukbang." Sort of. Was it a big old haunt mess, or did they do their best? You decide...

What Makes It Paranormal

What Makes It Halloweenie
What Makes it Messy
The moment after the ghost box/Shackhack may --or may not-- have said one of the ghouls names in response to the question if she could name any of us. You'll have to listen and see which ghoul's name you think you hear! 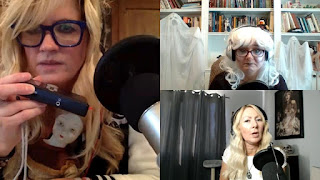 Here is our YouTube if you want to watch and listen!