It's a calamity of haunted errors as the ghouls battle technical difficulties and haunt mess potatoes in an effort to share their ghost experiences this week.

Sara, Deedee and Court have all had ghost adventures lately, and that's what they share this week. 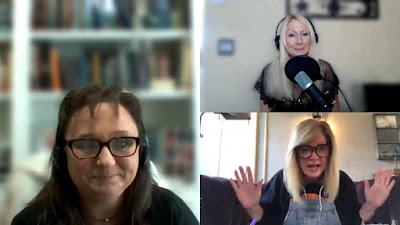 Sara was asked to investigate a private home with potential paranormal activity and a true crime connection.

Deedee went on a ghost hunt hosted by Craig Owens at the California Theater in San Bernardino.

Court stayed a night at the haunted Driskill Hotel in Austin and attended the Josh Gates Live! tour.

Why was Sara was plagued by technical difficulties this episode? Did something follow her home from her investigation? (Deedee's vote was an attachment. Court's vote was Mercury Retrograde.)

What's up with Deedee finding little doors everywhere she goes?

How did Courtney have a little bit of spooky fun with some unsuspecting guests at the Driskill?

And why do the ghouls engage in so much potty talk this episode?

Watch and find out!

Warning: As usual, there's a lot of inappropriate laughing at not politically correct subject matter, because that's what the ghouls do: they spit the straight truth and a have a good time doing it!

Boos in the loo

Where Else To Get Messy with the Ghouls
Posted by Madeupgirl at 4:43 PM