Curses are more complicated than they seem --and messy too. 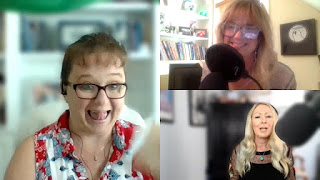 Which of the ghouls may have had a curse placed upon the males in their family?

Which ghoul sends curses back if she feels someone has sent her one?

And which ghoul now rethinks her stance on April as a cursed month after having watched the Shudder series, Cursed Films?

The ghouls get curious about curses and explore ways they might come about, question the reality of them even existing, and wonder what's the difference between cursed vs. haunted.

They also talk about the physical attributes of people who do the cursing. (Why is it always ugly, old, hags of women?)

The ghouls each bring a haunted headline to the table to vote on this week. Which one will they find messiest: screaming, howling, or dirty socks?

Which one do you think is messiest? (Headline, that is.) Tell us. That's what the comments are for!

Haunt Mess Potato Holder of the Week
Deedee (**Spoiler Alert!** She's the one who cheated on the rosary!)